Dotted among the 2.8 hectares of gardens at historic Bedervale are ethereal sculptures
created by the sister of owner Sonia Horan.

A headless skirted lady, “All Heart”, greets visitors as they enter the homestead from the
rear and milky white arms reach their hands to the sky from the understory of flowering
shrubs.

This modernist touch provides a counterpoint to the historic colonial homestead and
outbuildings that were built by convict ship captain John Coghill after he purchased the
land for 1400 pounds in 1822.

On the captain’s death in 1857, Bedervale passed to his daughter Elisabeth and her
husband Robert Maddrell whose descendants lived there until 1972 when Sonia’s family
bought the property, house and its contents.

The Georgian Colonial-style house, which was designed by well-known Australian
architect John Verge, was built by emancipated convicts between 1836 and 1840 using
bricks made on the property and stuccoed and lined to resemble sandstone.

Today it is listed as a building of historical significance by the Heritage Council and its
rare historic furniture and contents, including a collection of Coghill family portraits, are
owned by the The National Trust of Australia.

Sonia says the impressive facade was crafted to give the impression of grandeur as
Coghill was setting himself up as a gentleman in the colony of NSW.

“As it was originally only a three-bedroom house, it was really all show and no go,” she
laughs.

The current garden was first established in 1974 in an informal style which provides a
sweeping panorama from all angles. Massed planting and mature shade trees provide structure and the rolling rural vistas take in the nearby lake.

Standing to attention not far from the house is an enormous Bunya pine, a species which
can grow to 45 meters high and develop cones weighing 10 kilograms.

“As there were no roads or signs in the early days, they planted trees like this to let
passers-by know that this was a homestead, it acted a a landmark” Sonia says. 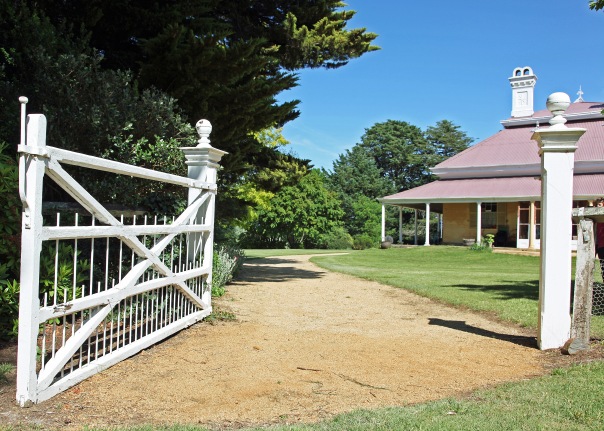 Old stables, a coach house, school room and kitchen edge the rear courtyard and to the
west, there is a gardener’s cottage, productive orchard, original vegetable garden and
historic family graveyard.